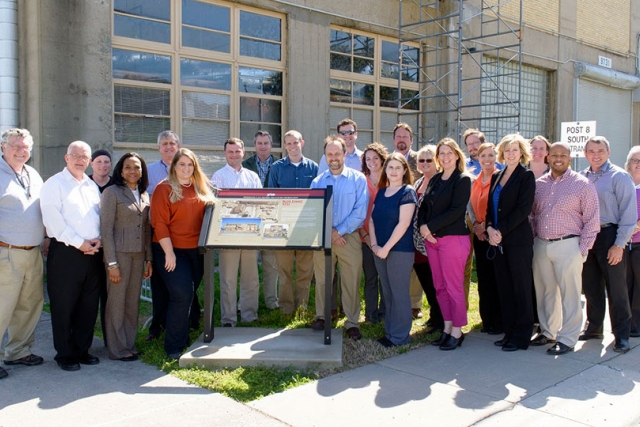 Leadership Oak Ridge Class of 2016 toured the historic Building 9731, one of the buildings at Y-12 designated to become a part of Manhattan Project National Historical Park.

During their visit to Y-12 on March 29, the 2016 class of Leadership Oak Ridge learned about Y-12’s history and current missions. As a part of their efforts to learn about Oak Ridge, the Y-12 National Security Complex tour has always been a highlight of the class, according to Greta Ownby, the Oak Ridge Chamber of Commerce Executive Vice President and Center for Leadership & Community Development Coordinator.

The tour began with an overview of Y-12’s missions in the Major General Kenneth Nichols Conference Center of the Y-12 History Center. Participants also toured one of the facilities designated to become part of the Manhattan Project National Historical Park, Y-12’s Building 9731. Y-12 Historian Ray Smith said, “This building was the first one completed at Y-12 and houses the world’s only Alpha Calutron magnets.” The group also saw display examples of the different nuclear weapons for which Y-12 has provided components. “Y-12 provides components for all our nation’s nuclear weapons and contributed to the winning of the Cold War,” Smith said.

Class member Tracy Beckendorf-Edou, executive director of teaching and learning at Oak Ridge Schools, said, “The Y-12 tour was informative, interesting and helped us learn not only about the history of Y-12 itself but also about how the community evolved before, during and after World War II.”

Beckendorf-Edou continued, “We learned about the security mechanisms in place to protect Oak Ridge residents from pollution, contamination and aggression, and we also learned about how safe it truly is to reside next to this national security complex. We also saw how Y-12 works with locations across the country so, therefore, how, we in our community, are part of a larger national defense profile.”

Harrawood was pleased with the response from his classmates about the tour. “As a CNS employee on the tour, I saw the amazement in many others who have lived in East Tennessee their whole lives but did not fully appreciate what this site has done and continues to do. It made me proud,” he said.