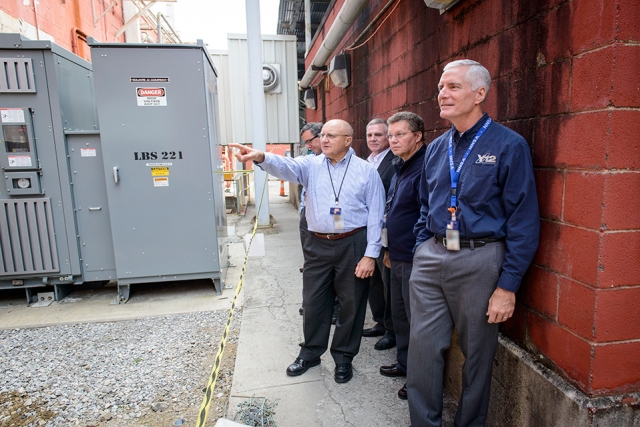 Much of this crucial work, however, is done in a degrading laboratory using equipment well beyond its intended life cycle. A 2014 baseline assessment of the facility outlined the most significant issues and identified numerous single-point failures and associated risks. To address the risks, of course, ACO would need money.

In late August of that year, NNSA Uranium Program Manager Tim Driscoll toured Y-12’s primary lab facility, Building 9995, and saw firsthand the need for infrastructure investments. Four days later, he committed $5 million toward improvements, but with one caveat: CNS must match the funds.

“Our senior managers made a commitment to DOE that we could do this,” David Maguire, Maintenance Program manager, said. “We were able to come up with the money by deferring some planned scope into later fiscal years and utilizing underruns from other areas within maintenance programs.”

Driscoll’s contingent offer, unique among project funding, proved successful. “This allowed us to obtain $5 million of additional funding to address serious infrastructure needs in one of our mission critical facilities,” Maguire said.

The funding was secured relatively quickly, and, over the course of the year, that $10 million was used for a number of equipment and facility upgrades. One major beneficiary was 9995’s radiochemistry laboratory, which separates isotopes from uranium using concentrated levels of
specific acids. The use of those acids necessitates ventilation hoods capable of meeting certain safety requirements. Until recently, only five of the lab’s nine hoods met those requirements, leaving the other four out of commission.

“Since each hood is ten feet long, the lab effectively lost forty feet of work area,” said Darrin Mann, manager of the radiochemistry labs. “This forced the lab to double and triple up in the remaining hoods to meet the site’s analytical needs, resulting in very crowded work areas.”

A portion of the $10 million funding source went toward replacing all nine hoods with lighter, shatter-proof windows, giving each technician their own hood to safely and efficiently handle hazardous chemicals.

“The hood flow has been greatly increased as well, reducing any potential fume exposure in the lab,” Mann noted. “And there were other modern updates such as better placement of electrical connections and an integrated lighting system to improve working visibility.”

“We now have much better control of temperatures in the labs, which is critical for some of our sensitive analytical equipment,” Placke said. “Overall, we have a better work environment, and we’ve reduced future risks to operations.”

Once funding was received, all the planning, procurement and installation activities for the various improvements were planned and executed expeditiously.

Extended Life Program asks ‘How do you make your buildings last?’