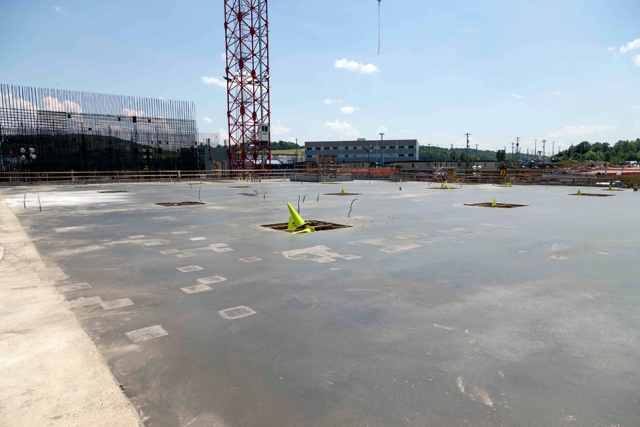 The final topping slab was placed at the Salvage and Accountability Building allowing structural steel installation to take the building vertical. Foundations for all UPF main buildings were completed ahead of schedule.

When the final topping slab for the Salvage and Accountability Building was placed it marked a major milestone for the UPF project – all foundations for the main UPF buildings were complete. The UPF team completed this milestone ahead of schedule.

“There were no major challenges to the SAB final placement other than the sheer size of the slab, which was about 17,000 square feet,” said Deputy Area Manager Randy Holman. “The prep work accomplished by the civil team set up the concrete placement team for success.”

The final topping slab placement was carefully coordinated. It took 11 concrete trucks a total of 92 trips back and forth between the onsite concrete batch plant and the SAB. The close proximity of the batch plant had major benefits for a placement of this size. The subcontract technical representative could quickly travel between the site and batch plant to personally oversee quality, and fewer trucks were needed because they made quicker runs.

The final placement required 885 cubic yards of concrete and was completed during a night shift. Placing concrete at night allowed the finishers to work during the daytime; concrete hardens quicker in the sun with the daytime heat than in the cooler evenings, so finishing work was completed in a shorter period of time. Working through the night resulted in less construction site traffic and congestion, which reduced the potential for concrete delivery delays as the trucks travelled between the batch plant and project site. 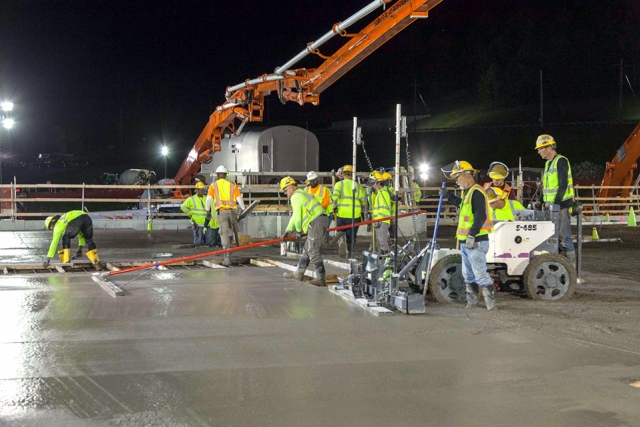 Concrete crews place 885 cubic yards of concrete during a night shift at the Salvage and Accountability Building.