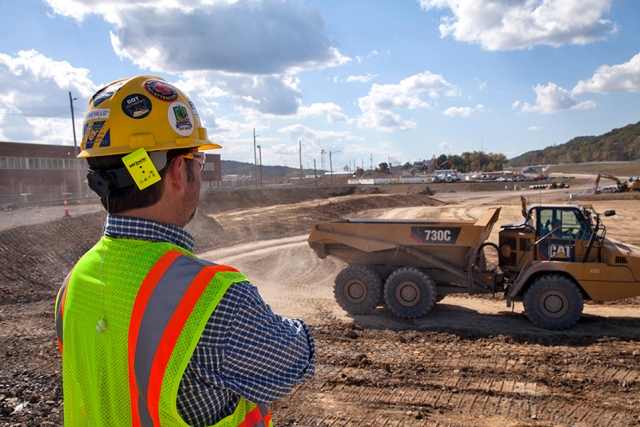 MyZone proximity detection system (as shown attached to the hard hat) alerts workers on the Uranium Facility Project when they are within 30 feet of heavy equipment.

If Brian Garrett or any other worker gets within 30 feet of heavy equipment at the Uranium Processing Facility project, a device in his hard hat vibrates to make sure he’s aware the equipment is in the vicinity.

UPF began using the MyZone proximity detection system as part of a mobile equipment/personal interface strategy to eliminate incidents between people and equipment.

“In addition to robust procedures, we also have this tool to help us achieve our goal of zero accidents,” said Garrett, UPF Environment, Safety and Health lead. “It gives people a personal warning to pay attention.”

The MyZone system consists of transmitters placed in vehicles and receivers the size of a pager that clip on to workers’ hard hats. A low-level radio frequency makes the receivers vibrate when they come within a certain distance of the transmitter.

Excavation began at UPF in September. Within the next few months, crews will remove about 300,000 cubic yards of soil from the future footprint of the facility, averaging about 120 loads per day.

UPF is using MyZone at the excavation site and at two disposal sites, where 15 constantly moving 45-ton articulated trucks load and dump soil.

UPF Project Director Brian Reilly and Construction Manager Matt Putinas have seen the MyZone system used on other projects and were advocates for adopting it at UPF.

“We are committed to minimizing risk to our workers, and the MyZone system adds another layer of protection,” Reilly said.