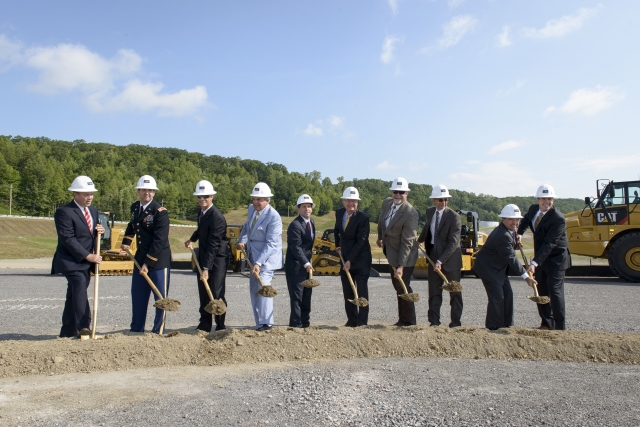 The Uranium Processing Facility Project celebrated the groundbreaking for its Construction Support Building today, signifying the first building construction activity where the project begins to change the skyline of the Y-12 National Security Complex. UPF is a project of the Department of Energy/National Nuclear Security Administration.

“I am honored to be here today to celebrate another important milestone in the UPF Project at Y-12,” said NNSA Administrator General Frank Klotz. “The Construction Support Building will be the first permanent structure built in the UPF Project, a hugely important step in modernizing our nuclear infrastructure to meet national security needs for now and in the future.”

UPF’s first subproject, Site Readiness, was completed on-time and under budget in 2015.

When completed, the Construction Support Building will be the first permanent structure on the UPF Project and the first building at Y-12 with a LEED Gold Certification. The three-story structure will provide office space, as well as a warehouse and construction craft break areas. The building will replace the need for large group of temporary trailers usually associated with large construction projects and will be available to house UPF operational and support personnel when the UPF is complete.

The U.S. Army Corps of Engineers Nashville District is managing construction of the Construction Support Building for the UPF Project Office and plans to complete the building in Fall of 2017.

“We appreciate our partnership with the U.S. Army Corps of Engineers and their leadership on this project,” said UPF Federal Project Director Dale Christenson. “Our success can be credited to our committed team of professionals from the NNSA UPF Project Office, the Corps, and the Consolidated Nuclear Security UPF project team, as well as our leadership at NNSA Headquarters.”

UPF is a first-of-its-kind project that supports the Y-12 Enriched Uranium missions. Using a “build to budget” strategy, the NNSA has committed to Congress to provide these facilities by 2025 for no more than $6.5 billion. As one of the largest construction projects in Tennessee history, UPF will have a significant impact on local and state economies.