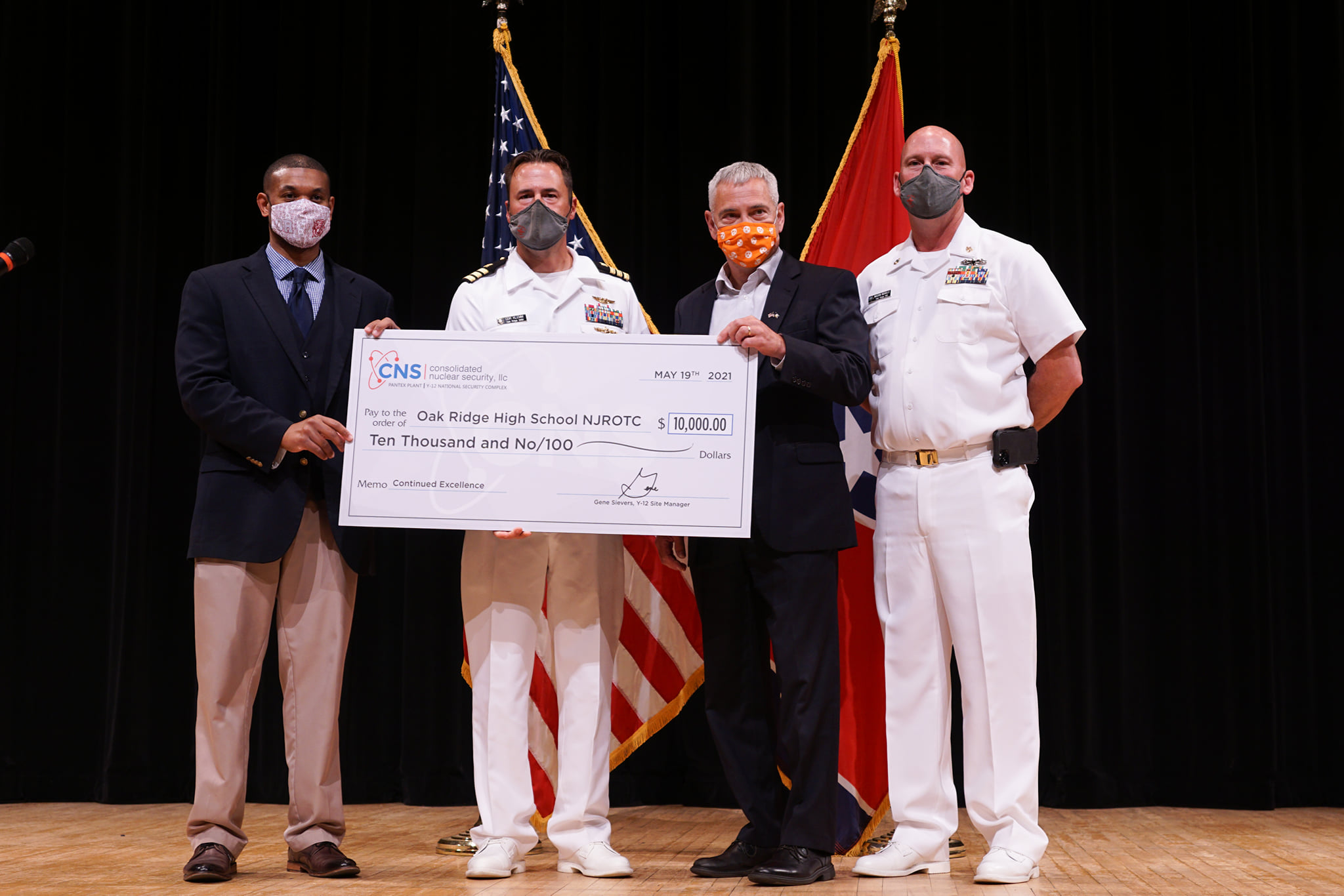 Oak Ridge, Tenn.— The Oak Ridge High School Navy Junior ROTC began four years ago with a donation from Consolidated Nuclear Security. As the first class of seniors who have been with the program all four years graduates, CNS is making another significant donation to the program.

On May 19, parents and NJROTC community partners attended a ceremony at Oak Ridge High School to celebrate the cadets’ accomplishments. During the ceremony, Y-12 Site Manager and retired U.S. Navy Capt. Gene Sievers announced a $10,000 CNS donation for continued support of the program. Other organizations provided scholarships and awards to the cadets.

“It’s vitally important to support programs like this in schools,” said Sievers. “Providing these students with a way to explore military careers and leadership while still in high school can significantly affect their career trajectory.”

After receiving the donation, Chief Ryan Nicholls, naval science instructor, said, “To tell you how important this company is … without CNS, this program wouldn’t have happened.”

From inception to success
The program at ORHS has grown quickly over four years, with almost 10% of the student body now participating. The group has also won accolades, including the Area 9 Distinguished Unit Award with Academic Honors for the third consecutive year. Nicholls was also honored as teacher of the year in competition with 11 other high schools.

After recognizing the seniors, Cmdr. Keith Klemm, senior naval science instructor, explained that it was a tradition to ring a bell when a plank owner, an individual who was a member of the crew when a ship was commissioned, departs the ship. Klemm and Nicholls then rang off the seniors who had been with the NJROTC program since its inception. The ceremony concluded with a change of command, installing a new cadet leader for the Wildcat Company. 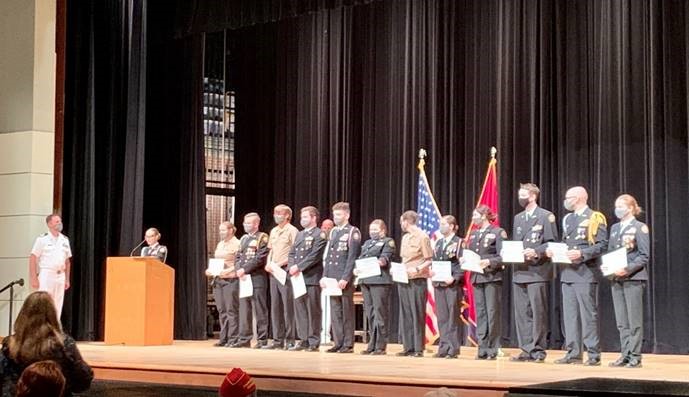 Cadets who started the Navy Junior ROTC program in 2017 are now seniors and “plank owners.” 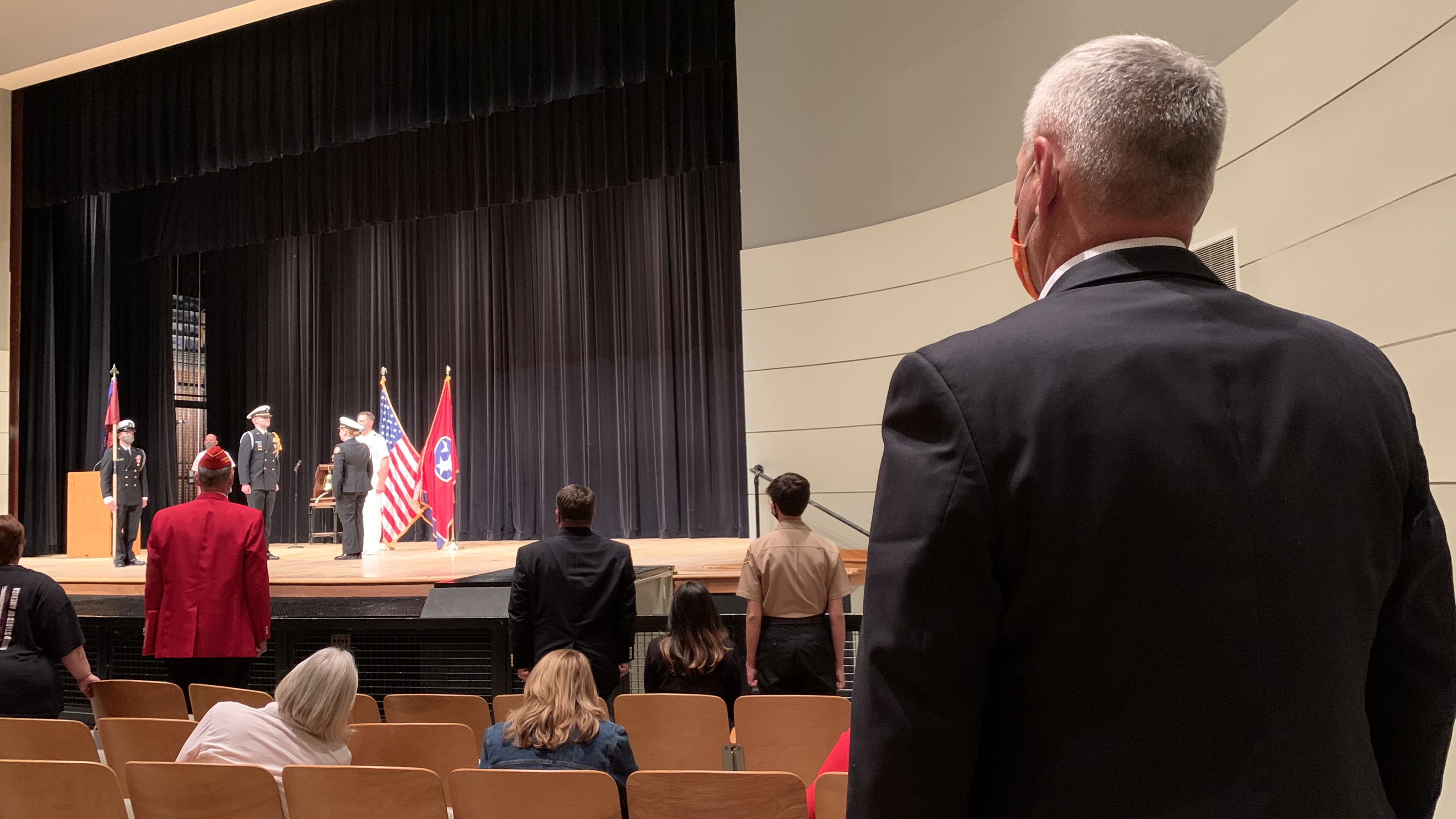 Veterans, cadets, and members of the military, including retired Capt. Gene Sievers at right, stood to recognize the change of command at the end of the evening’s ceremony.
###