CNS contribution made in honor of history-making Oak Ridge 85 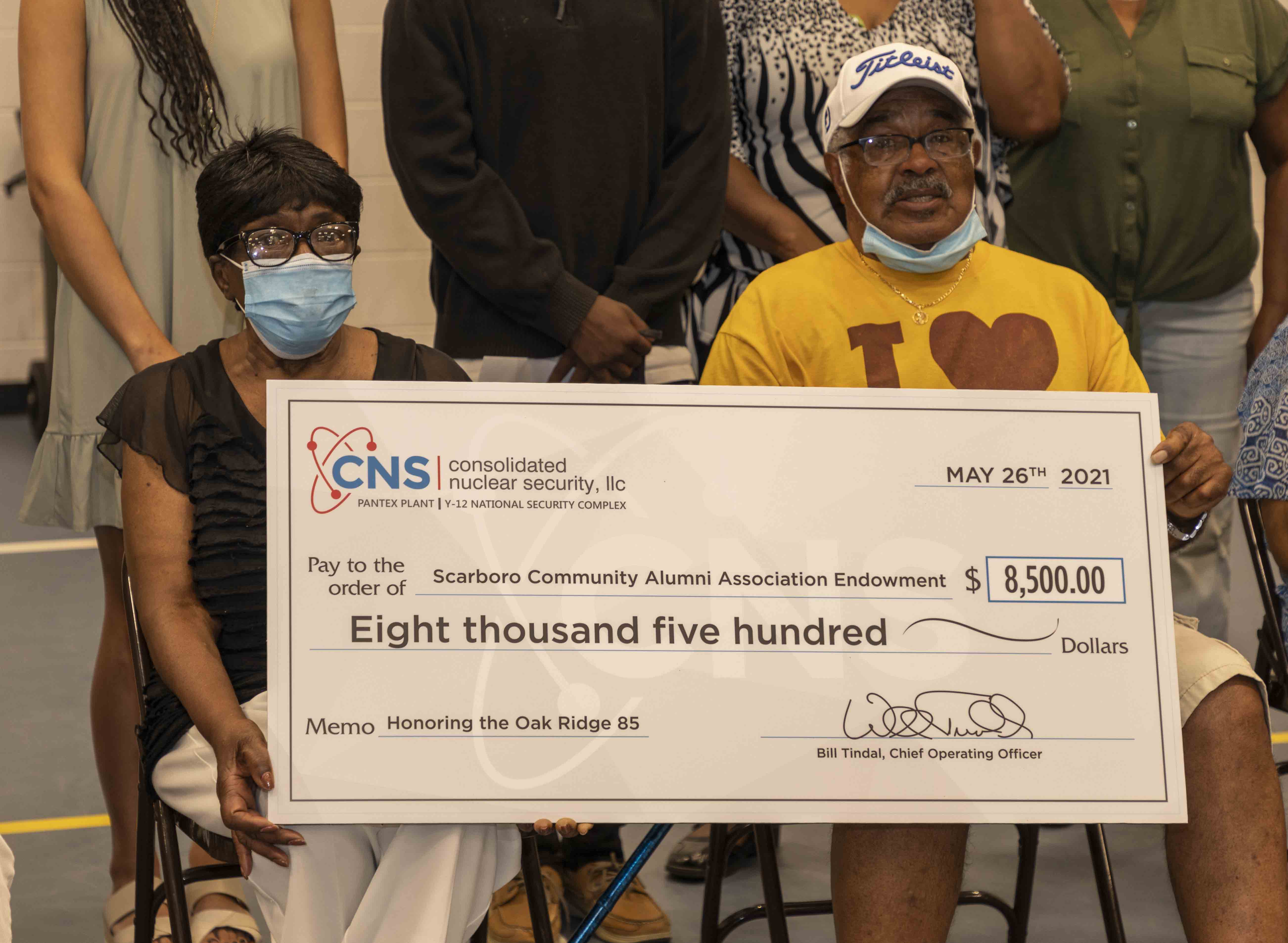 Dorothy Kirk Lewis and L. C. Gipson, members of the Oak Ridge 85, hold the check representing the $8,500 donation from Consolidated Nuclear Security given in their honor.

Oak Ridge, Tenn.— At the conclusion of a school year during which Oak Ridge commemorated the 65th anniversary of the integration of Oak Ridge High School and Robertsville Junior High, the Scarboro Alumni Association received an $8,500 donation for their scholarship endowment.

Consolidated Nuclear Security, the managing and operating contractor of Y-12 National Security Complex made the donation at the Scarboro Community Center on May 26, 2021 in honor of the 85 Black students who integrated Oak Ridge schools in 1955. The endowment provides scholarships to selected high school seniors who have an association with the Scarboro community and who choose to continue their education.

Little-known history
The Oak Ridge 85, as they are known, consisted of 85 students who integrated Robertsville Junior High and Oak Ridge High School on Sept. 6, 1955. They were the first students to integrate a public school in the southeast.

The historic accomplishment has received limited attention until recently. That it happened in Oak Ridge could help explain why the story has not been shared more widely. As a federally created and controlled community, not much was known about the “Secret City” for its first three decades. Perhaps it’s only fitting, then, that a federal contractor is recognizing and honoring those 85 students who led the way with integration.

The Oak Ridge 85 lived in the Scarboro Community of Oak Ridge. Decades later, an endowment was established to provide scholarships for students from Scarboro. This year’s recipients—Jaylen Heyward, Faythe Summers, Maya Lewis, and Bridget Slater—were announced by John Spratling of the Scarboro Alumni Association. Lewis is the granddaughter of Dorothy Kirk Lewis and the late Jimmie Lewis as well as the great niece of the late Frank Kirk—all members of the Oak Ridge 85. Slater also has a tie to the group as the great granddaughter of Eloise Mitchell.

Many of the scholarship recipients, who had to write essays about the Oak Ridge 85, admitted knowing little about the history-making group before applying for the scholarship. Their appreciation of the group’s accomplishments was evident, with Heyward saying, “Thank you for making this possible for all of us.”

In presenting the donation, CNS Chief Operating Officer Bill Tindal publicly thanked the Oak Ridge 85 “who made history and took the first steps in a journey that is not yet over.” He noted, “These dollars will provide future scholarships for Scarboro community students as they take their first steps toward higher education … steps that will continue the journey started 65 years ago.” 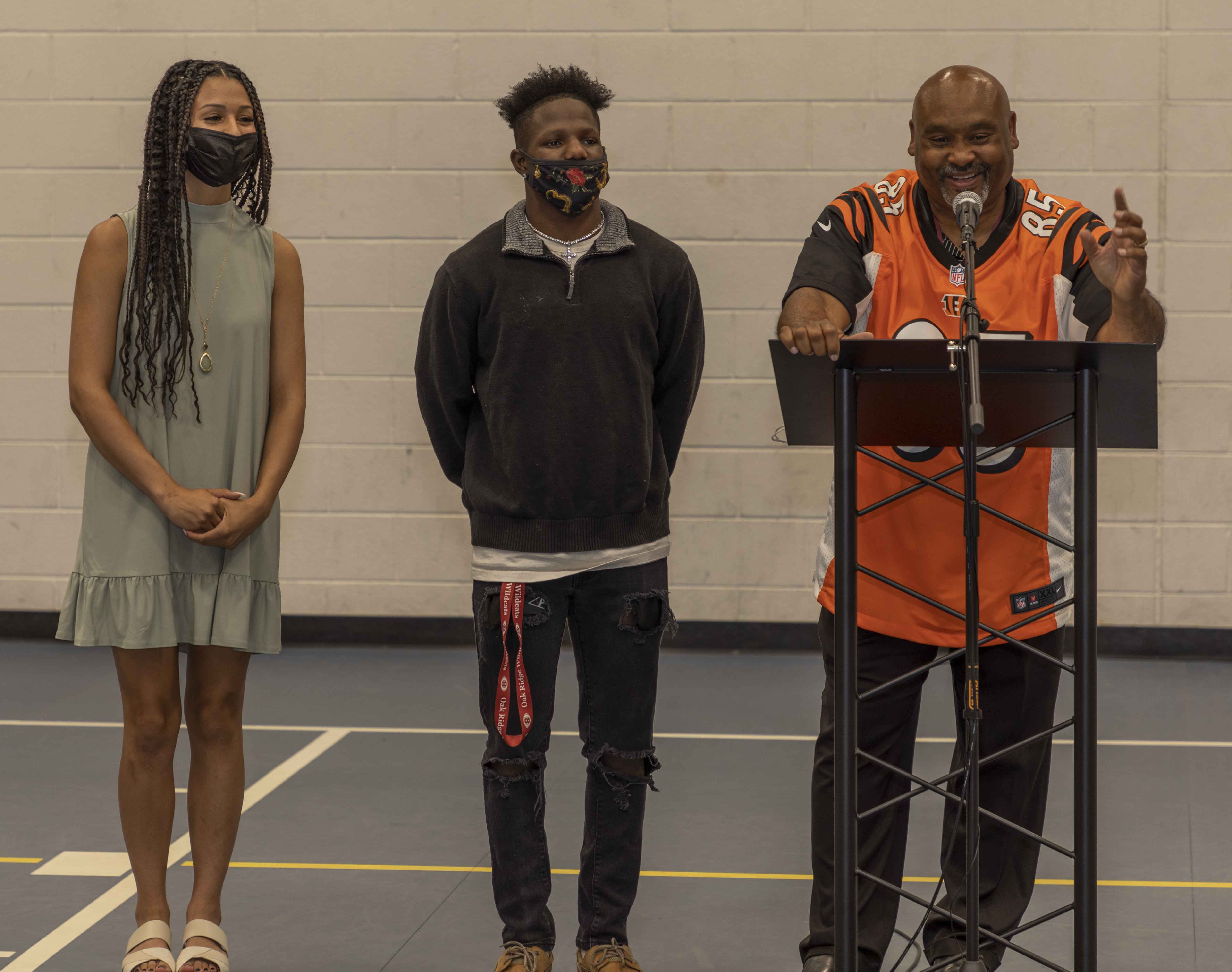 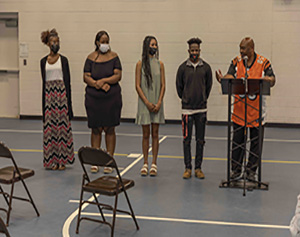