This team helps improve how weapons parts are machined.

In racing, a pit crew works fast to get a car back on the track. At Y-12, a group called the PIT Crew has helped speed up production of a weapon part and lowered costs.

The crew consists of machinists who are developing process improvements that reduce time to manufacture components.

The team is a first of its kind at Y-12 that specifically focuses on weapons production. They are production personnel on the floor who perform this work daily. Someone from the outside wouldn’t have the expertise and understanding that they do. The group said there is a better way.
The change not only increases production, but also facilitates more time and attention focused on other projects.

The improvement updated two machining setups. One setup positions and drills depth holes on one side of the part. Previously, this was done by a jig-bore machine and used a clamp to stabilize the part. Unfortunately, the clamp sometimes damaged the part if it was overtightened. Three hand-placed inserts (cutting tools) were used to center drill, drill length, and end mill the part’s bottom. Then, the part was removed and deburred (smoothed rough edges) by hand. The process took 35 minutes per part.

The other setup cuts the profile, then positions and drills the through-holes on the other side of the part. This was done by a K&T 5 axis mill, which is an older and sometimes unreliable machine. Because of its age, it was often difficult to find replacement parts. The equipment used six machining inserts, also placed by hand. Four hours were needed per part. 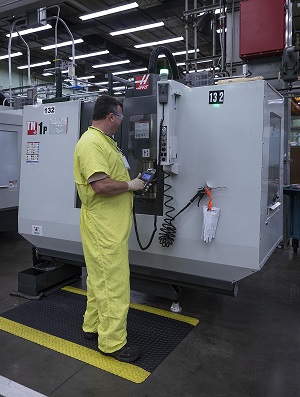 A machinist works at the Haas TM1 milling machine, where two setups were moved to speed up production of a weapon part.

Both setups were moved to the Haas TM1, which is a vertical computer numerical control (CNC) mill, which means the milling machine is moved and monitored by CNC rather than by hand. The mill has a tool changer, which is also a game changer, saving time and alleviating frustration.

The first setup now employs a vacuum fixture to hold the part in place, eliminating the possibility of damage from the clamp. Also, a deburring tool was added, eliminating manual finishing.

In addition, both setups share inserts, which reduces the number of inserts that have to be changed.

The move decreased machining time for the first setup from 35 minutes to three minutes per part, and from four hours to 20 minutes per part for the other setup. That equates to a 90% increase in productivity.

In addition to increased productivity, the improvement allows machines to be used for additional projects and removes time consuming bottlenecks. Another benefit of the change is that floor movement and material travel are reduced. Before, the machines used were sprinkled throughout the shop. Now, the Haas mill is across the aisle from the work station for a setup that occurs adjacent to both of the improved setups. This placement results in less movement and decreased tool handling, which minimizes injuries from sharp tools, tool setup errors, and tool damage. It also lowers man hours needed for the work.

Overall, the input from the PIT Crew is invaluable. The machinists know their opinions matter, and the changes make their lives easier.