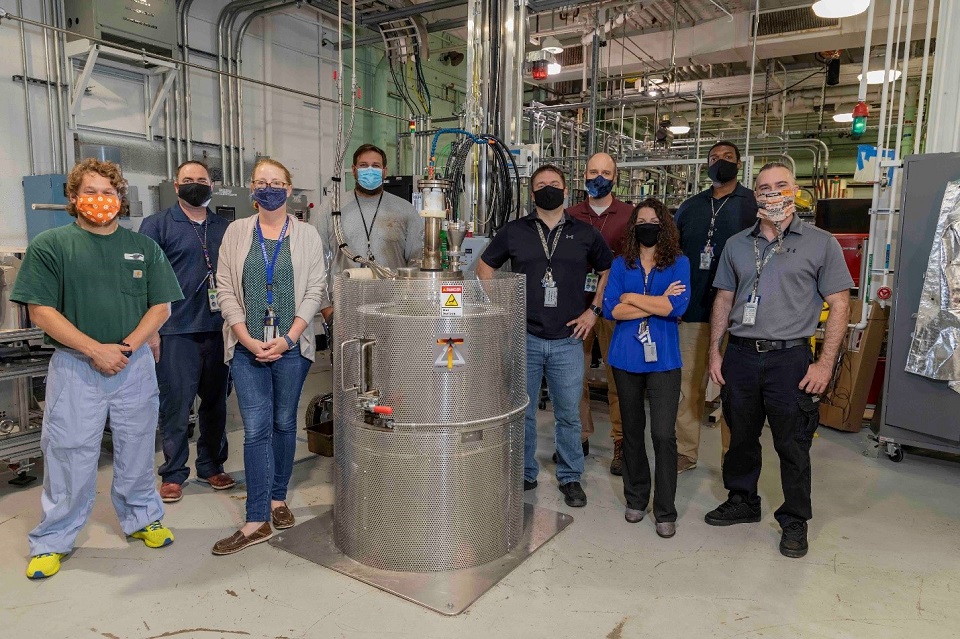 Advanced Lithium Cell Project Team standing next to the prototype after it was successfully operated.

The advanced LEC is one of the most sophisticated lithium cells in the industry and significantly improves safety for personnel performing the production, as it produces metal in an enclosed cell. It also provides higher efficiency and minimizes chloride corrosion of the manufacturing facility.

“This lithium cell demonstrates the feasibility of allowing workers to produce lithium metal at a significantly higher efficiency for the Y-12 mission,” explained Jesse Bush, Y-12 Development Lithium Processing section manager. “The increase in safety during production also permits operation in work clothes under normal factory conditions instead of an open, molten salt bath requiring operators to skim metal by hand in a steam suit.”

While the first run on the new LEC was a success, the process was not without setbacks. At the beginning of the project, the team ran into trouble brainstorming ways to interface new technologies with the existing electrolytic cell design, which has been the workhorse in the industry and at Y-12 in spite of numerous other modification attempts over the last 50 years. So, instead of trying to build on the current outdated technology, a completely different design was developed that incorporated new thinking and a new approach. Switching paths to a new design resulted in a quick procurement of materials and fabrication of the cell, as it consists of modular components that are, for the most part, commercial and off the shelf.

“I’d watched other projects at Y-12 struggle with vendor fabrication and deliverables. After a few months of discussions with other Y-12 staff, I decided that we could still execute high quality and meaningful research and development without the need for outside fabrication support,” explained John Freiderich of Y-12 Development’s Lithium Processing group. “We sketched a few ideas and then contacted several vendors for their stock items. After receiving these standard items, and with the help of our on site fabrication capabilities, we built the cell quickly and for quite a bit less money than it would have been otherwise. Each component of the advanced cell is ordinary, but the way they are assembled is anything but.”

On its initial run, the advanced LEC was successful in producing a lithium metal button.