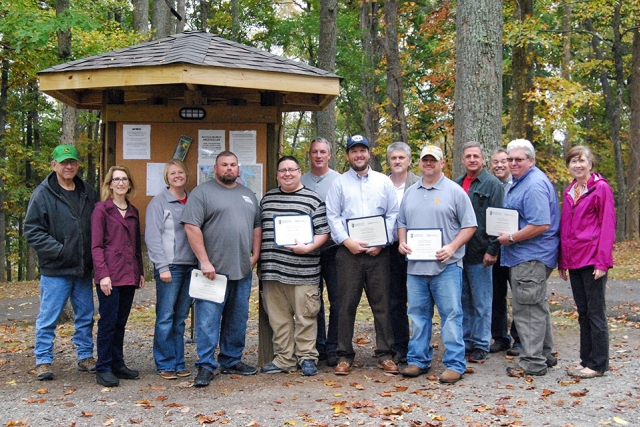 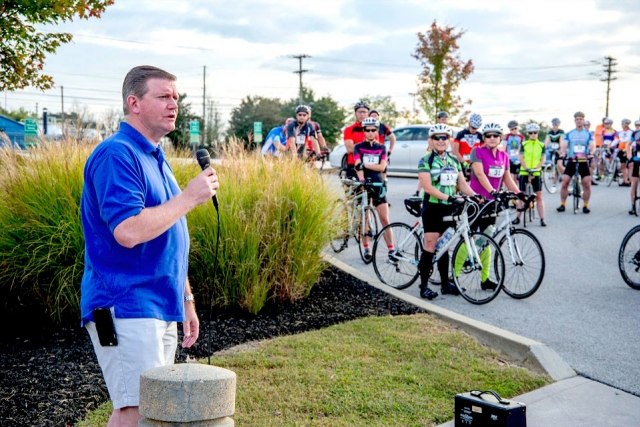 The parking lot at New Hope Center was a burst of colors in the early morning hours of October 16 as bicycle riders, decked in colorful jerseys and helmets, gathered for the 7th annual Turning Leaf Bike Tour.

This year, 86 riders took part in the event that raises money for Casting for Recovery, a program whose mission is to enhance the quality of life of women with breast cancer through a unique combination of
breast cancer education, peer support, and the therapeutic sport of fly fishing.

The physical, rhythmic motion of fly casting is similar to exercises often prescribed after surgery or radiation to promote soft tissue stretching. Emotionally, women experience a new activity in a safe environment with a supportive group of peers.

“CNS Y-12 is proud to support this event as a presenting sponsor, along with Thom Mason and our friends at Oak Ridge National Lab,” said Y-12 Site Manager Bill Tindal, who welcomed the bicyclists prior to the ride. “And we couldn’t be prouder of our employees who volunteer their time and effort in making this the largest fund raiser for Casting for Recovery in East Tennessee.”

This year’s ride raised enough money to support four women to participate in next year’s retreat.

And this year, for the first time, it had more women riders than men.

“Age was not a factor in being able to participate. Our youngest rider was 10 years old, and our oldest rider was 83,” said Lindsey Long, East Tennessee program coordinator for Casting for Recovery.

But Long said it was CNS Y-12 involvement that made this year’s event successful. “Kathy Martin volunteers all year as part of the Casting for Recovery retreat staff; David Hicks designed the commemorative challenge coin that each rider received; David McEahern mapped and marked the routes; route support vehicles were staffed by David Arney, Heather Mathews, and Sherri Nichols; and Abe Mathews served as the events coordinator,” she said.

“It’s a program we believe in, and we’re pleased that our employees’ efforts helped make it such a great success,” said Tindal.

The event moved to New Hope Center last year after relocating from Townsend. 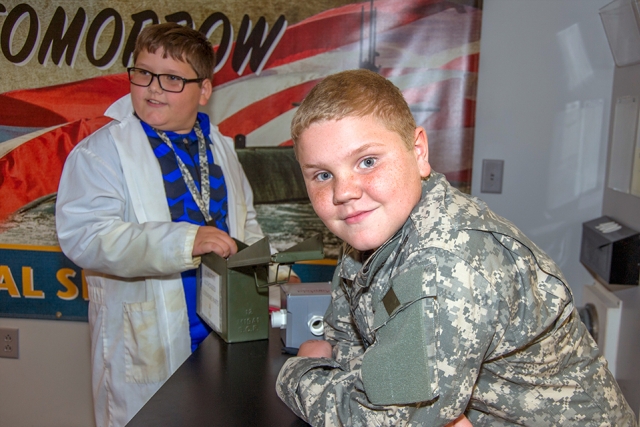 Students from Fairview Elementary in Scott County work in the Y-12 storefront during the recent grand opening at Junior Achievement of East Tennessee BizTown.

Consolidated Nuclear Security, LLC (CNS) officials were on hand, along with students from Scott County’s Fairview Elementary School, for the opening of JA BizTown’s newest resident, CNS. CNS and the Atomic Trades and Labor Council worked together with Junior Achievement to create a shop that mirrors the Y‑12 mission.

“Much like our work environment at Y‑12, we have designed the CNS BizTown business to reflect all the parties involved in successfully fulfilling a mission,” said Bill Tindal, Y‑12 site manager. “From the CEO to the Protective Force officers to the engineers and trade skills, it takes everyone working together to get the job done, and we hope this BizTown storefront helps young people learn about incorporating teamwork to safely and securely achieve their mission.”

JA BizTown gives young students the opportunity to be part of a community, interview for jobs, work in groups, run a business, and even be mayor. Fourth grader A. J. McCloud was elected mayor of BizTown and read a proclamation officially declaring: “Y‑12 National Security Complex is OPEN for business!”

“It’s great to see young people learning entrepreneurship and getting a hands‑on chance to put what they’ve learned into action,” said Tom Hayden, CNS senior director for Safeguards and Security and a JA of East Tennessee board member.

JA BizTown was established in 2008. Since then, more than 50,000 East Tennessee children have had the chance to be citizens and participate in the activities. 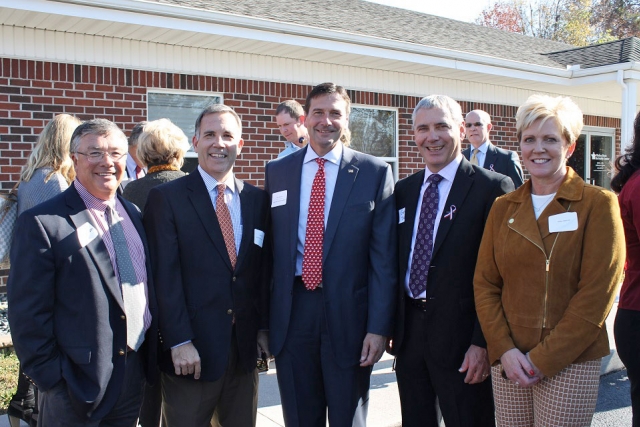 Representatives of Consolidated Nuclear Security, LLC (CNS), officials with Helen Ross McNabb Center (HRMC) and others took part in the opening of a new behavioral care treatment facility, which fills gaps in services for veterans and active military members in East Tennessee.

“We thank Consolidated Nuclear Security for its generosity and compassion for veterans in our community,” said Houston Smelcer, vice president of Development and Government Relations for the Helen Ross McNabb Foundation.

Under the new program, the Center will collaborate with the Veterans Administration to identify individuals who are experiencing mental health and/or substance abuse disorders and get them
individual and family therapy.

“We aim to serve those who have courageously served our country to guarantee they have access to the resources and support they need to continue healthy and purposeful living,” said Jerry Vagnier, HRMC president and chief executive officer.

Highly trained master’s-level clinicians will be employed to provide treatment services. Clinicians will be certified through the National Council for Behavioral Health as “veteran behavioral health providers.”

The services will include counseling, couples counseling, and family counseling for those experiencing mental health issues, including post-traumatic stress, anxiety, and depression.

These services will be available to any service member, spouse, or family—regardless of his or her discharge status or length of service in any branch of the armed forces—and will be provided at no cost.

“Without the support of organizations like CNS, we could not provide this vital service to our area veterans,” Smelcer said.

“Veterans’ issues are a major focus of CNS, which employs many veterans at Y-12 in Oak Ridge and Pantex in Amarillo, Texas,” said Jason Bohne, senior director of CNS Communications and Public Affairs. “CNS is honored to assist veterans and active military whose service helps keep America free.” he added.

CNS’s support of the treatment program is part of an ongoing partnership with HRMC and its effort to meet the unique needs of those “who served.” In 2015, CNS provided funding for the Center’s Veterans Housing project. 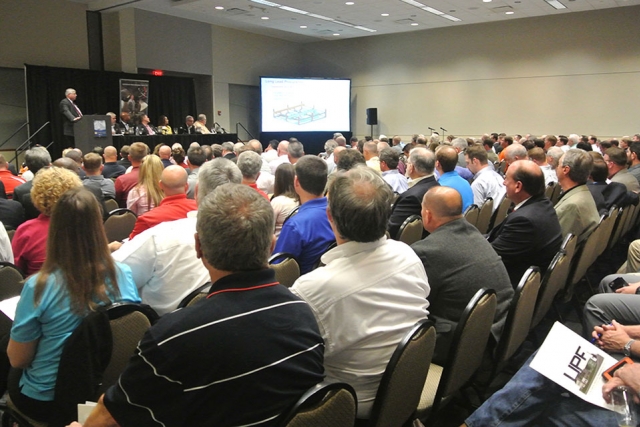 UPF Procurement and Engineering presented at an informational forum for potential vendors on Oct. 13 in Knoxville following the Energy, Technology and Environmental Business Association conference.

Y-12 bookended this year’s Energy, Technology and Environmental Business Association (ETEBA) conference at the Knoxville Convention Center. From the ceremonial ribbon cutting at the kick off to a post-conference forum, Y-12 officials interacted with the local business community.

Following the conference, personnel from the Uranium Processing Facility project spoke to a standing-room-only crowd at an informational forum for potential vendors in Knoxville. More than 300 business representatives hoping to do business with UPF attended the forum.

After a presentation from UPF Procurement Director Rich Brown and a question-and-answer period, potential vendors had an opportunity to speak with procurement and engineering representatives about upcoming bid packages and the pre-qualification and registration processes.

UPF procurement will kick into overdrive during the next couple of years, with the majority of purchases for the project made between 2017 and 2019.