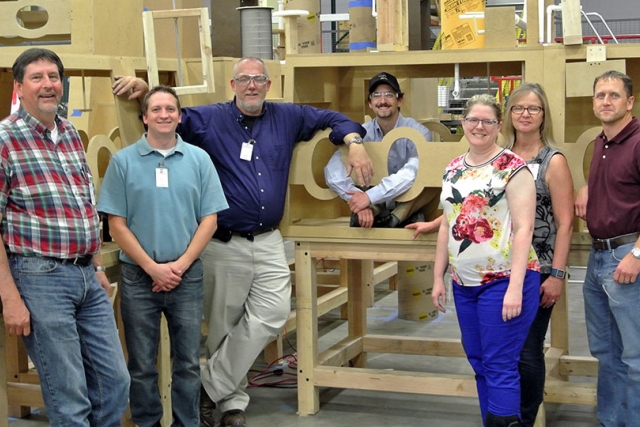 Project team members from Y‑12 and Merrick & Company during evaluation of the electrorefining glovebox mock‑up at the fabrication facility.

“In Engineering, you never know when you may be presented with an opportunity that has the potential to enrich your career,” Bill Heineken, Y-12 Engineering, said. Recently, he learned of a Y-12 project that needed a liaison to the project’s design contractor, Merrick & Company, in Denver, Colorado. He submitted his name as a potential candidate while knowing few other details, and the following week, he was told he would be assisting the Electrorefining Project.

“A significant portion of my Y-12 career has been supporting enriched uranium operations in a variety of roles, so I was excited about having a part in this project,” he said. “The ER Project is a unique effort in the modernization of Y-12. It is one of the rare times when a new process technology is proposed to replace multiple current process operations.”

“My role was not technical or engineering focused; instead, it allowed me to identify needs for the project to proceed and to reduce barriers,” he said. He identified actions for fostering communication and co-ownership of specific design deliverables, which both Y-12 and Merrick implemented.

“The real success, however, came from the joint project team,” he said. Together Y-12 and Merrick developed a recovery schedule and met the near-term milestones. The project has completed 100 percent design and will be initiating fabrication.

“I cannot wait for the day when the first purified enriched uranium metal is produced by the installed production equipment and hazards are reduced in Building 9212,” he said. “That will be the ultimate success for this project team.”

Having that enthusiasm is what makes working at Y-12 so exciting—it’s more than a job.