Gilmartin said, “I was involved from the beginning planning and execution on all of the sprinkler heads — up until this last one that completed the project. Construction personnel accomplished a significant safety [milestone] as much of the work was highly elevated, requiring employees to work 10 to 50 feet off the building surfaces. The team worked many 13 day straight workweeks without any safety issues.”

“It was great to see our team performing the sprinkler work while minimizing impacts to mission critical facility production activities,” Wilson said. “Throughout the process several folks displayed participative decision making. They were actively involved in sharing ideas during the planning phase for each system. At the same time, craft participated during field work activities by identifying safety concerns and issues for potential to cause delays, so these items could be worked out without any delay to the project.”

Chris Hammonds, project manager since 2016, said, “Terry played a major part in the overall planning and execution during my tenure on the project. The sprinkler fitter crew provided superior support and performance throughout the effort.”

“I think the most significant accomplishment was the team developing the ability to be mobilized and working different phases of projects in multiple facilities at the same time,” he said. “Some of the team might have been erecting scaffolding in preparation for an outage in one facility, while actively replacing credited sprinkler heads in a different facility, and also shipping waste and closing out drawings in possibly yet another facility.”

The sprinkler heads, which were originally retrofitted to existing nuclear facilities beginning in the late 1960s, were at the end of their 50 year life. While testing a sampling of the fire protection systems may have given a 10-year reprieve on replacement, site leadership chose a longer term solution.

“The facilities that these sprinkler systems protect are essential to ensuring our nation’s security,” said Y-12 Site Manager Bill Tindal. “Therefore, we must take a long term view. Successful completion also provides a safer environment for our workers and increases confidence in our facilities to operate now and well into the future.”

Hastings saw the team demonstrate all CNS principles, but during the process, he felt one stood out: attention to detail.

“As work was being executed, the project team was able to identify multiple legacy deficiencies and get most of them repaired while the project was mobilized. This attention to detail resulted in the facility being left with a more sound and robust fire suppression system,” Hastings said.

“Replacing these credited fire suppression sprinkler heads has enabled many of our mission critical facilities to continue production operations with an improved margin of safety, without extensive and unnecessary interruptions or delays,” Hastings said.

Hammonds said, “This team completed the project as one and ensured it was completed safely and efficiently within schedule and budget.” 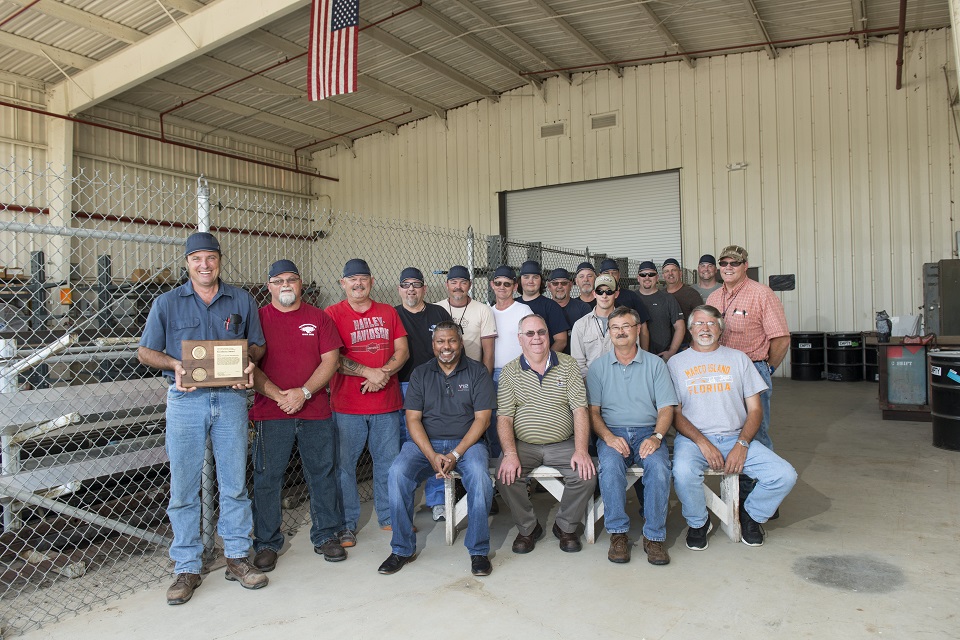 The 50 year sprinkler head replacement crew, pictured in 2016, works so close to ceilings that they must wear these special “bump caps” instead of hard hats. The team was recognized with a 2016 NNSA award for its work in Building 9204-2.