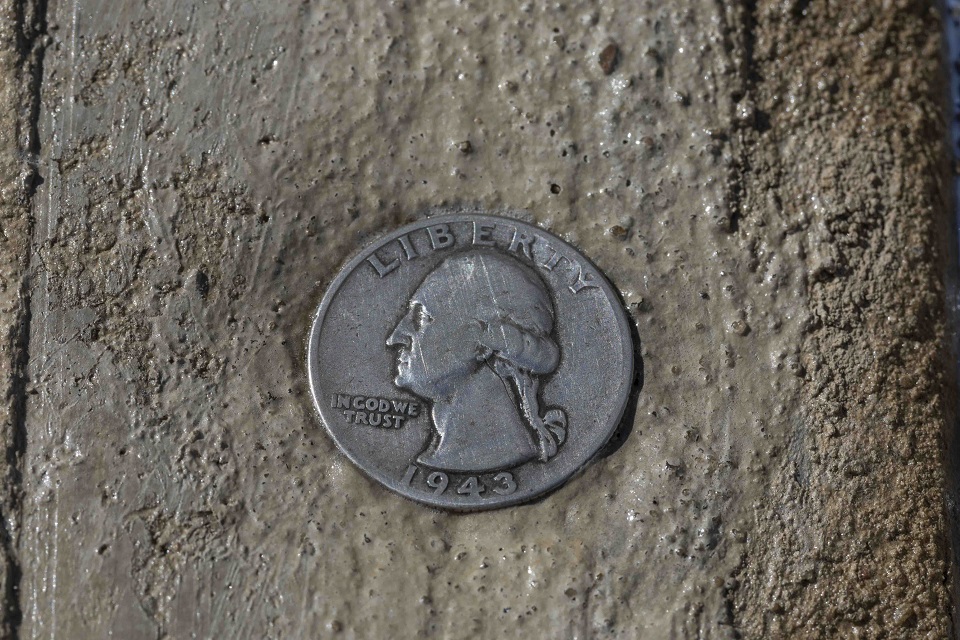 A special touch: Holding to the masons’ tradition, a 1943 coin, the year Building 9731 was built, was placed into the pavement.

It’s a nondescript yellow brick building just down the hill from the Jack Case Center at the Y 12 National Security Complex. The building could be easily ignored as an inconsequential structure, but looks can be deceiving. Recently, the look improved a bit.

Building 9731, known as the Pilot Plant, is Y-12’s oldest structure. Constructed in 1943, it housed the first of what became more than 1,100 calutrons across the site. Calutrons were the electromagnetic machines that separated the uranium isotope U 235 from U 238, enriching the uranium to bomb grade and providing material for Little Boy, the first of two atomic bombs that helped end World War II.

The building’s historic significance has placed it and Building 9204 03 (Beta 3) in the footprint of the Manhattan Project National Historical Park. Established in 2015, the park’s three units extend from Oak Ridge to Los Alamos, New Mexico to Hanford, Washington. All were vital pieces in the mission to build an atomic weapon.

Susie Smiddy is Building 9731’s manager and has been working with Y-12 infrastructure to enhance its look and utilization.

“I’ve been working to make Building 9731 a premier facility that reflects the important values, character, and powerful history of the building since 2018,” Smiddy said.

One of the obstacles to enhance the building’s character was the front entrance. The concrete was broken and uneven, and there was gravel where an old storage shed used to sit.

“I contacted Darrel Watkins, the site’s planner for masons, and we worked on a design that would maintain the historic nature of the entry area. We sat together over several months sketching out ideas and patterns,” she said.

“Jeff and Noah spend a lot of time — plant wide — making our sidewalks and entryways safe. They suggested replacing the entire entry area. During the planning process with Susie, we recognized an opportunity to truly make it better, and reintroduce a style that encompasses the building’s rich history,” Watkins said.

The solution they chose was to pour, stamp, and color concrete at the entrance. The finished product stays true to the historic nature of the building, but it is also a showcase of the artistry and craftsmanship of the masons involved in the project.

But it wasn’t just the masons, as others were also integral to the project. Carpenters Corey Brown and Paul Oakes built lean tos for the masons when rain threatened the work, and they built the frames for each section of the pour, in addition to framing the two ground wells.

This took a team effort from the masons and carpenters, to the laborers who added river rock to the entry, to the heavy equipment operators and pipefitters,” said Smiddy. The process took a lot of planning and communicating. “Darrel and I talked directly with Jeff and Noah, not only as we planned the project, but up to the day they started performing the work, making adjustments along the way.”

The final special touch, holding to the masons’ tradition, was to place a 1943 coin, the year Building 9731 was built, into the pavement.

“So often with much of the aging infrastructure at Y-12, it’s simply fix what needs to be fixed and move on,” said Watkins. “This project presented an opportunity to actually step out and produce something that instills pride in our site and in the workmanship of our craftspeople.”

“My hope, as we continue to preserve this facility, to expand the tour route, and repurpose it for the training mission to ensure long term sustainment, is that we create something that everyone can be proud of,” said Smiddy.