What began as a summer internship for Joseph Bell six years ago led to valuable research for CNS, a master’s degree, doctoral study, and — on August 3 — the offer of a permanent job at Y‑12. 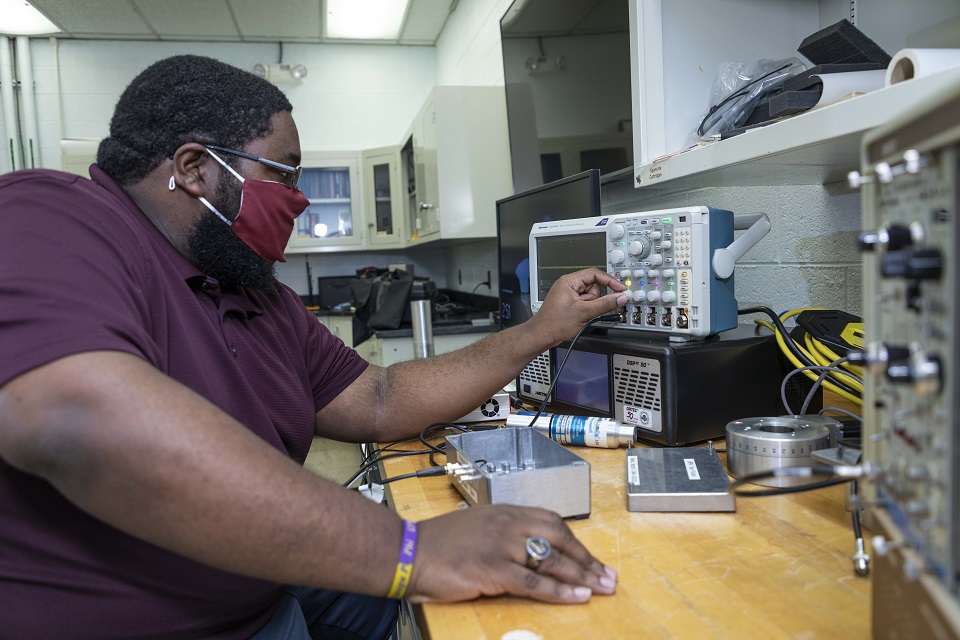 Now in his sixth year as an intern in the National Nuclear Security Administration’s Minority Serving Institution Partnership Program, Bell is pursuing his Ph.D. in physics by researching new types of radiation detectors and how they can be applied in nuclear nonproliferation.

Pantex and Y-12 have taken part in the program since 2013, and this summer hosted eight MSIPP interns at each site. NNSA designed the program to build a sustainable pipeline between Department of Energy sites/labs and minority serving universities and colleges in science, technology, engineering, and math disciplines. Six DOE national labs and two national security sites participate in the program. (Pantex and Y‑12 are considered one site under CNS. Kansas City National Security Campus is the second.)

Dr. Ashley Stowe, a manager in the Engineering Technical Operations Group, has directed the program for CNS since 2014.

“The MSIPP is a workforce development program that works with minority‑serving colleges in order to help build their campus infrastructures and curriculums to ultimately create opportunities for their students to get NNSA STEM jobs,” Stowe said. “We use the program as a way to target critical skill needs at both Pantex and Y‑12.”

The consortium‑based teams focus on STEM research areas and is funded through NNSA grants to the universities, which choose the consortia focus in needed areas. Stowe said the consortia have changed through the years, as have the participating higher education institutions. This year the areas of research include electrical engineering and sensors, lithium and uranium additive manufacturing, explosives technology, laser-based spectroscopy, composite materials and sensors, radiation studies and cyber.

Stowe said he feels deep pride when mentoring the interns and talking about their successes. A number of former interns now work at the sites, including Maxx Jackson, who joined CNS the year after his internship and now conducts research in materials science at Y‑12. Next summer, Bell will begin his full‑time employment after he completes his doctorate this school year.

“I have a lot of passion for this program. We’re creating opportunities for these talented young people, and making sure we support them to become the best young scientists and engineers,’ Stowe said.

Several interns have returned for multiple years, but Bell’s six years is a record. Stowe first met Bell at Fisk University in Nashville when he was beginning work on his master’s degree. Bell’s research project that first summer was so successful it became his master’s thesis. That goal met, he moved on to pursuing a doctorate through the Fisk‑Vanderbilt Bridge Program.

Bell said in addition to science and research, he has forged key relationships with future collaborators and made lasting friendships.

”MSIPP/CNS has given me the opportunity to pursue high-level research in both an academic setting and a government facility. A setting like this allows me to see the effects of my work on a much larger scale,” Bell said.

“Working as an intern has brought my education to life,” Ruiz said. “I have seen the real‑world applications of reaction engineering. Pantex has offered me an invaluable experience, even in the midst of these uncertain times.”