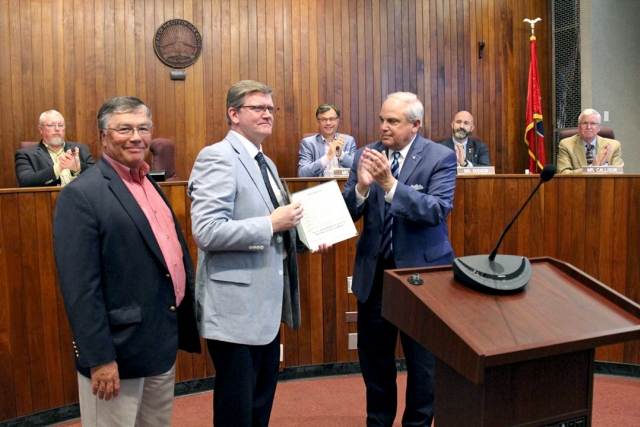 Rep. Chuck Fleischmann (R-TN), whose district includes Y-12, recognized Y-12 June 8, in the nation’s capital, and at a recent Oak Ridge City Council session, a proclamation was read for Y-12.

Fleischmann recognized Y-12’s 75th anniversary in the June 8 edition of the Congressional Record and a flag was flown over the U.S. Capitol in honor of the occasion.

“Seventy five years ago, the men and women of the Y-12 plant worked tirelessly to protect our national interests and help us win World War II …,” Fleischmann said. “The 75th anniversary of the Y-12 National Security Complex is an occasion to reflect on this proud history and celebrate the people of the complex for their contributions.”

A proclamation recognizing Y-12’s 75th anniversary was unanimously passed by the Oak Ridge City Council in May. Oak Ridge Mayor Warren Gooch presented a copy of the proclamation to Y-12 Site Manager Bill Tindal and Gene Patterson of CNS Communications.

“As a Y-12 employee, I can say with confidence that we are proud to carry on the heritage of making the world a safer place, and our dedication to securing the nation’s future is unwavering,” Tindal told the audience and council members.