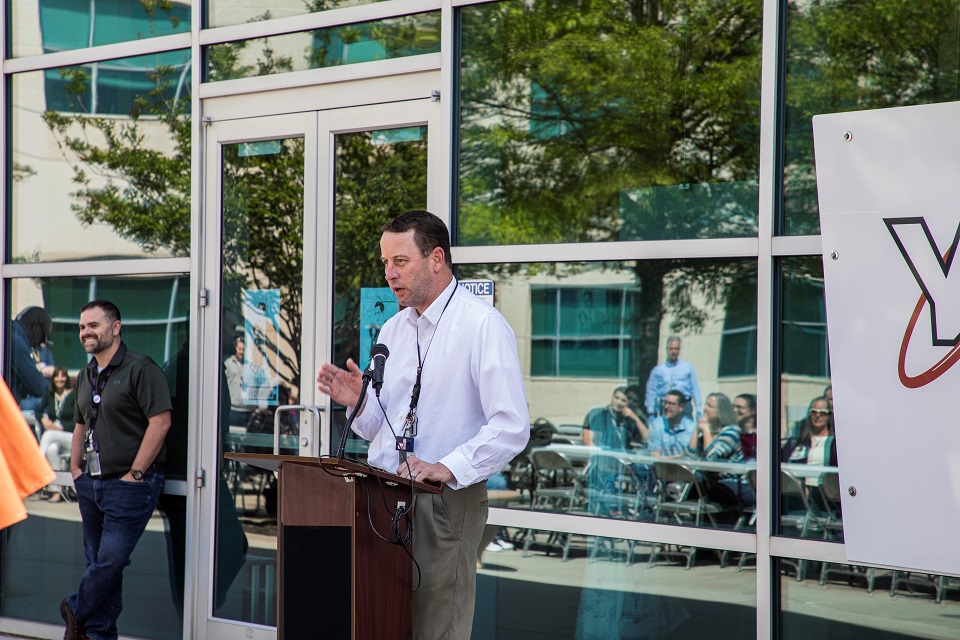 Y-12 employees recently gathered to celebrate the conclusion of the roadmap.

Nuclear Criticality Safety is a foundation for much of the work performed at Y-12, and site leadership recognized the importance of improving the program to continue to ensure the safety of enriched uranium operations.

In 2018, the Nuclear Material Stewardship Site Initiative was created. It focused first on integrating the cross functional aspects of NCS. The NCS team took a risk based approach to investigate and analyze legacy issues, from equipment that had been out of service for decades to single items requiring proper disposition. The site initiative was used to ensure actions were executed as planned and were effective in preventing occurrence of accumulation events.

As the site initiative progressed, the task of coordinating all resources and actions became quite overwhelming. The Criticality Safety Management and Integration group was created under the Y-12 site manager to develop an integrated and resourced NCS schedule and to serve as the focal point for all Y-12 NCS activities.

A roadmap to success

In an effort to document the initiative, an NCS roadmap was created. The roadmap comprehensively captured the multiyear journey and clearly articulated remaining actions, as well as outlined the journey to becoming a best in class NCS program. An integrated schedule was fully used to track and complete actions, process descriptions were updated, and process drift awareness was initiated.

As the roadmap neared completion, a series of comprehensive reviews were completed and no significant gaps were identified. The roadmap completion took a great amount of effort from many organizations across Y-12, including Production Operations, Infrastructure, Training, Engineering, Quality, Safety and Industrial Hygiene, and others.

“The Y-12 NCS roadmap has been a true embodiment of the teamwork and can do spirit that makes Y-12 such a special and unique place,” explained Amanda Curtis, Y-12 Criticality Safety Management and Integration senior director. “Our workforce demonstrated that everyone is part of the NCS program. From the training team developing briefs on criticality safety evaluations to explain the ‘why’ behind the controls, the infrastructure team making modifications to improve the facility, the craft incorporating NCS into their daily actions, the engineering team who wrote procedures and drawings to implement improvements, the NCS engineers and Critical Safety Officers who wrote and implemented a huge number of improvements, and the countless others who worked on corrective and improvement actions, the culmination of these efforts has imprinted our NCS program on the collective DNA of the Y-12 workforce. It was a tremendous achievement.”

Process Engineering, through their improvement plan as part of the roadmap, updated all process descriptions to better define elements of each fissile processing system and held numerous classes to raise awareness regarding process drift. These items, in combination with efforts from all other NCS teams, were substantial improvements to prevent accumulation events.

“I am amazed at how far Y-12 has come in the area of NCS,” said Vice President of Mission Engineering Tony Boser. “The improvement to NCS processes and systems, along with the creation and execution of the roadmap, demonstrates what a healthy program looks like and that by working together we can achieve anything.”

After almost 5 years, the Nuclear Material Stewardship Site Initiative and the remaining roadmap actions were closed.

During a recent NCS roadmap completion celebration, Y-12 Site Manager Gene Sievers noted, “Arriving at the end of the roadmap signifies an immense amount of effort from multiple programs at Y-12. NCS is the fundamental and unique program at Y-12 as criticality safety impacts all organizations on this site.”

The goal of Best in Class

While the NCS risk and site initiative have been completed, the goal of becoming a best in class program continues.

“The best in class for NCS programs would be a very elite group, and there is no one in that group currently across the DOE complex,” explained Susan Kozemko, Y-12 Engineering senior director. “Best in class would mean that we have the best NCS program (comprehensively) and are set apart from the other NCS programs due to our ability to deliver the highest quality compared to our peers. We have made great strides over the last two years or so, but we have a number of things to accomplish to complete that achievement.”

To achieve the goal of best in class, the NCS team is developing a plan featuring comprehensive indicators that will indicate the total health of the program. Once those indicators are developed and agreed to by National Nuclear Security Administration Production Office, the NCS team will roll out the plan and use that to track program progress going forward and work toward achieving the title of best in class.

“It is important to see that, together as a team, Y-12 is setting the standard of what a best-in-class criticality safety program looks like,” exclaimed Rory Rauch, NNSA associate deputy manager of Operations at Y-12. “This could not have been accomplished without the entire Y-12 cadre working together.”