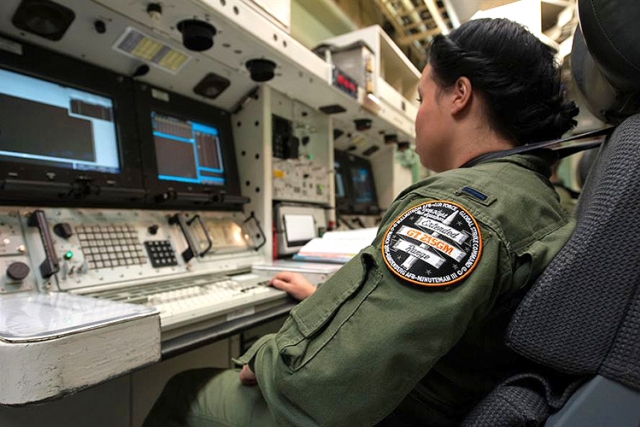 Standing 30 feet below the cold, snow-covered Montana earth, looking at a live, 60-foot-tall Minuteman III missile that he could reach out and touch (if that were allowed), Alan Armentrout found himself speechless.

“I’ve tried, but I can’t even come up with a word to describe it,” Armentrout, a machinist in Special Materials Operations, said. “You could say ‘powerful’ or ‘amazing’ or something, but none of those are strong enough.”

The group climbed down into a Minuteman III missile silo; toured the associated launch capsule where, behind 10-ton blast doors, Air Force operators sit strapped into chairs at their workstations; and witnessed a warhead changeout from both the silo and the payload transporter situated above the silo’s opening.

“You’re standing in that silo, looking up at the tip of that missile near the surface and just thinking about what it can do,” said Burlingame, a 9212 supervisor. “It was an eye opener.”

Throughout their time in — and under — Montana, the men couldn’t help but think of Y-12, nearly 2,000 miles away, and its role in the massive display of force in front of them.

“At Y-12, we get entangled in schedules and the minutiae of running a shop daily,” noted Hackworth, Special Materials Operations production manager. “But all the work we do has converged to this one point. These nuclear weapons are there, and they need to be able to go off at any point. All the work we’re doing really counts.”

On the first day back at Y-12, Fritts, a supervisor at the Highly Enriched Uranium Materials Facility, took that message to his crew. “I told them that they do have a bigger purpose,” he said. “We might think that moving a can here or there seems tedious, but it’s the beginning of this whole process. I’ve seen that end product now, and it wouldn’t get done without us.”

Armentrout has already noticed that perspective affecting the way he approaches his work. “I think I pay attention more to all the little details that protect what we’re doing,” he said. “I appreciate even more what we do and feel an immense amount of pride.”

As a bonus, the group was able to sit in on an intelligence briefing. For most, it was their first time hearing a detailed assessment of foreign relations and threats. “The world is a dangerous place,” Burlingame said. “There’s a real threat out there and a real need for these weapons.”

That need, Fritts thinks, is ultimately about peace. “These things are there to guarantee peace,” Fritts said. “We certainly hope they’re never used, and so does everyone else — that’s why they are so absolutely essential to our defense.”

For Burlingame, the trip is still largely indescribable. “It was something visceral,” he said of his experience. “We play a major role in national security. That’s clear to me now, and those words have taken on a whole different meaning.”