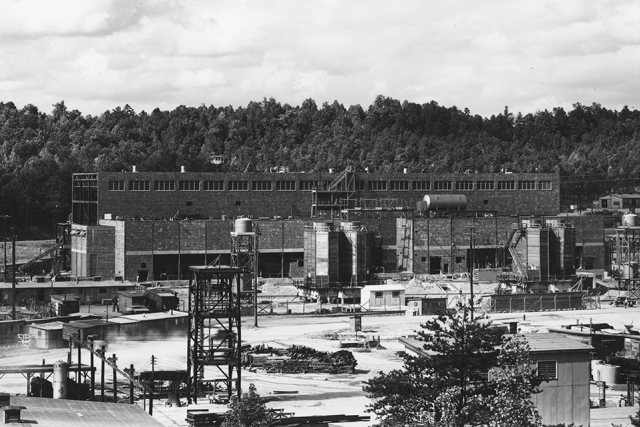 Y-12 made history by opening and operating Building 9204-4 (Beta-4) in 1945 to house the workhorse Calutrons that separated uranium for the first atomic bomb. The building later was recycled to house Cold-War processes, including the production of lithium-6. Almost 75 years later, it is stepping through the complex process to prepare the 400,000 square-foot facility for eventual demolition.

Jack Bolinger is leading a diverse team to complete three phases of the Legacy Material Removal project in the building, and phase one just wrapped up. “The focus was to remove any equipment that wasn’t hardwired in or bolted down,” he said. The project was awarded in June 2017 and completed in February 2018. “The total amount of material shipped to the Environmental Management Waste Management Facility was approximately 2.71 million pounds and 932 cubic yards of equipment (that’s equal to 30 average-sized airplanes).”

This effort significantly lowers the risk in the building by removing the majority of combustible material and reducing the number of radiologically and beryllium-posted areas. A large portion of the building was down-posted from a high- to a fixed-contamination area, which means personnel are no longer required to dress out in personal protective equipment for these areas. Lifting this requirement will facilitate current surveillance and maintenance activities as well as future demolition and disposal activities.

“This huge undertaking would not have been possible for any single organization at Y-12 to handle on its own,” said Bolinger. He credits the multi-organizational team and their subcontractor, Gem Technologies, as instrumental in their success.

As one of the behemoth Calutron buildings, the sprawling three-story Beta-4 facility could house seven football fields. It was closed in 2003, still holding an array of leftover equipment, tools and remnants that tell its story of WWII, Cold War and post-war missions.

Y-12 is scheduled to turn Beta-4 over to Environmental Management by the end of 2020 for demolition, which will facilitate environmental cleanup, reduce the Y-12 footprint and minimize risk to the public.