Structural steel stood up at the Salvage and Accountability Building 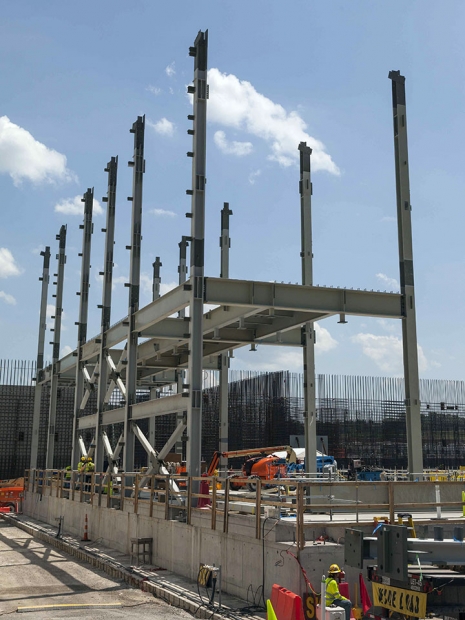 The first pieces of structural steel were installed at the Salvage and Accountability Building, marking a major milestone in the construction of the three-stories-tall building.

The first pieces of structural steel were installed at the Uranium Processing Facility Project’s Salvage and Accountability Building (SAB). The project team placed the building’s first four columns and four cross beams in May.

“Placing the first pieces of structural steel is a significant milestone for the project,” said SAB Federal Project Director Don Peters. “It is a visible symbol that communicates to everyone that the SAB is entering the next major phase of work. Moving forward over the next few months, all the team’s planning, preparation, and hard work will become even more noticeable as we see the building take shape.”

The steel columns currently being installed are about 60 feet tall and weigh between 10.5 and 12.5 tons each. The first phase of structural steel installation will continue over the summer and calls for almost 800 pieces that collectively weigh about 1,500 tons. The steel will be installed in rows from south to north, progressing across the building from east to west. When sufficient steel pieces have been installed, work on the second floor will begin.

At 127,000 square-feet, the three-story SAB footprint is approximately the size of one football field. It is designed to recover production chemicals and process non-destructive assays, contaminated items, and waste.