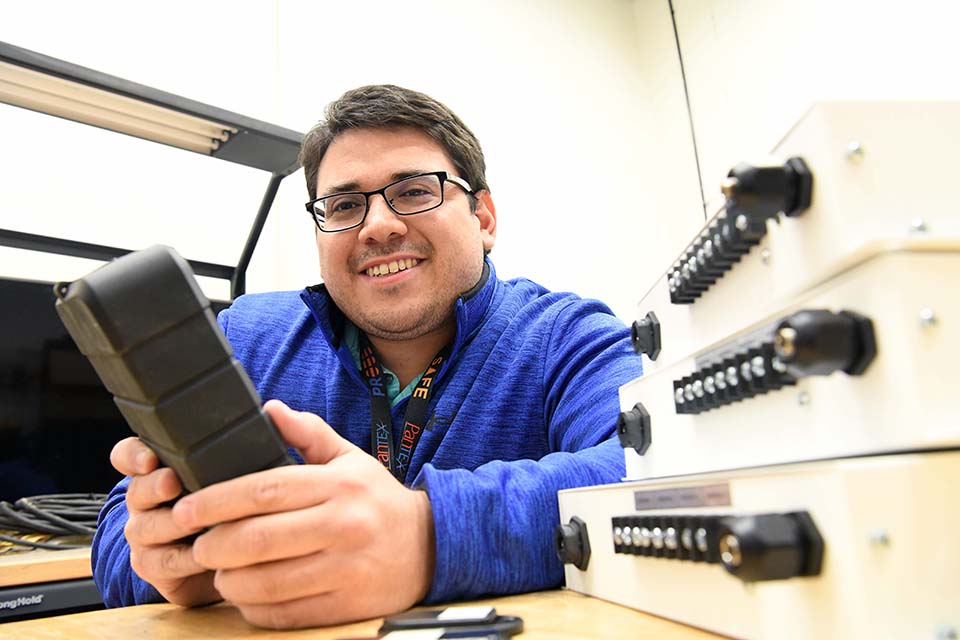 Pantex Development Engineer Paul Aguirre of the Tracking and Sensor Networks Integrated Project Team with some of the project equipment.

Engineers at Pantex are testing a new wireless tracking system that will eventually manage the location of key components such as containers, tools, and equipment across the sites. It’s a big advancement since devices that communicate wirelessly are prohibited in many locations at Pantex and Y-12.

The key to this technology is that it doesn’t use typical Wi Fi or Bluetooth frequencies, but rather operates on a separate, lower-frequency bandwidth.

Pantex Senior Director for Infrastructure Joe Boudreaux said Pantex and Y-12 are developing the system to replicate, in a security conscious manner, technology available outside the sites.

“We are seeing trackers used more and more in our personal lives to locate pets, phones, and even cars. The wireless property tracking project is designed to develop a solution to track components meeting all of our requirements for use at both Pantex and Y 12,” Boudreaux said.

“We are leveraging and adapting technology used at other Department of Defense and Department of Energy sites,” said Development Engineer Paul Aguirre.

The problem with the existing systems is that locations must be manually updated, Aguirre said. The new system would prevent time wasted to track missing items and money spent replacing lost items.

“I have people in my group who have more than 70 items they have to keep track of. It’s easy to lose track or misplace items throughout the year. Hopefully, we’re going to eliminate that problem,” he said.

If all goes according to plan, testing of the new system will begin later this year followed by implementation, first at Y-12, in FY 2023.