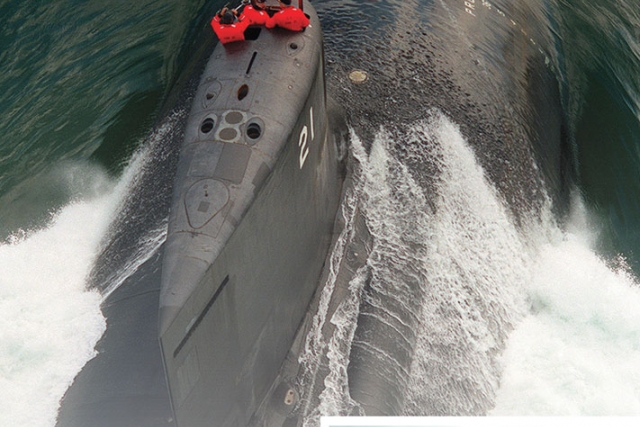 For decades, attack submarines were either fast or quiet — but never both. The fast subs were so loud that an enemy could hear them long before they were within striking distance. In the 1980s, when the U.S. Navy was creating a nuclear sub that would be both fast and quiet, they turned to Y‑12 for an extremely difficult manufacturing challenge. “This job was different, urgent and fascinating,” said John Gertsen, vice president of Uranium Processing Facility Programs, who was the production manager at the time.

“We had done work off and on for the Navy,” said former Y‑12 Plant Manager Gordon Fee, “but I received a call one day from an admiral in Washington who said that they were having great difficulty in producing models of some of the blades that they used for the propulsors for submarines. Could we make some blades for them?”

Building a quarter-scale propulsor prototype would demand highly complex fabrication, machining and materials, as well as development of the manufacturing process. Decades of weapons work had made Y‑12 a master in all these areas. So, yes, Y‑12 could make the blades. “We created a series of designs, a whole bunch of models,” Gertsen said. “We sent the scale models out to be tested on a quarter-scale sub. They'd test, then ask for a new shape or feature or instrumentation.” The quarter-scale model testing went on for several years.

“We have great abilities with classified, complex work because of the nuclear weapons program,” Gertsen continued. “We have everything needed for developmental manufacturing and prototype work. We have a research and development organization to back up our work, we work with a large variety of materials, we have strong program design and our inspection and testing capabilities are world-class.”

Y‑12 also was responsive. “On about a Thursday I received a call that the Navy had just run some new tests at Penn State on tiny blades, and they were interested in coming to Y‑12 on Monday to discuss the possibility of us making a larger blade for them to test,” Fee remembered. “We said, 'Could you ship us the coordinates of the blade that you want?' We got it on a Friday. When they showed up about 9 o'clock on Monday morning, they were amazed to see that we had a stereolithography model of that blade that we had fabricated over the weekend from the blade model data received. They had never seen anybody that responsive in being able to create something.”

Once the test models established the ideal design, the Navy was ready to build a full-size prototype. “We didn't think we were being considered for that,” said Gertsen. “But when the Navy wasn't confident that their regular suppliers could make the prototype quickly and economically enough, we learned that we had always been their plan B.”

Y‑12 had most of the equipment necessary but needed a few pieces of large equipment to do the job, such as a special eight-axis computer-controlled milling machine, a huge lathe and large inspection devices. A large workspace was also needed, so a 6,500-square-foot wing was added onto the Alpha 1 building.

“And, oh yeah, the Navy said, 'Procurement took longer than we thought, so can you take a year out of your production schedule?'” Gertsen said. Y‑12's response? Can do. Production of the full-scale propulsor had been slated for four years, but the schedule, which included the Alpha 1 wing and equipment acquisition, was shortened to three.

The sub's hull number was SSN 21. “An ongoing joke at Y‑12 was that SSN 21 stood for 'Saturdays, Sundays and Nights, 21 shifts a week,'” said Paul Sooter, lead engineer for design activities.

The final prototype, divided into three subassemblies, traveled to General Dynamics in Connecticut, which was building the submarine. One part went by oversize truck, and two parts were so large they traveled by barge, starting from Oak Ridge and the Tennessee River system.

Y‑12 completed the project ahead of time and within budget. “It was a spectacular job, done by the folks in Alpha 1 who learned how to take something used for manufacturing weapons and to machine these gigantic blades,” said Fee.

“We were a good fit because it was development of a first of a kind,” said Gertsen. “Y‑12 is geared to that. We're not just a production operation; we're good at developing new processes, manufacturing design, manufacturing and inspection, and engineering. We use these skills for nuclear weapons programs.”

For the second submarine, the Navy hired a Minnesota firm to build two of the three subassemblies. Y‑12 shared “the paper, the hardware and the people” to make the follow-on units and made spare parts, Gertsen said. Y‑12 also made the third assembly and transferred that technology to the naval propeller shop in Philadelphia.

“The Navy said they didn't want to send a new concept straight to the shipyard,” Gertsen said. “They preferred Y‑12 to do the first version, because we have the science and engineering background behind what we do.”

The first Seawolf submarine was commissioned in July 1997. The SSN 21 was the fastest, quietest submarine ever. The Navy's Virginia class submarine succeeded Seawolf, and Y‑12 did the model work and manufacturing design for the test scale.

“We haven't done a prototype the scale of Seawolf since,” said Gertsen, “but that work got us into other interesting prototypes, such as the Advanced Amphibious Assault Vehicle for the Marine Corps.” Y‑12 developed and delivered innovative planing hulls and turrets for the vehicle.

Additional benefits from the Seawolf project are wide-ranging. Simulation capabilities used for identifying human/machine interface issues have been applied to Y‑12 glovebox ergonomics and process development.

Simulations from a virtual machining software system are used today to verify production components. And the accuracies required for the manufacture and certification of the submarine's components are the underpinnings of Y‑12 Production's precision machining and inspection techniques.