Y‑12 orgs get a grip on hand safety

While many tools can be carried in a construction worker’s tool belt, none are more important than the ones that fasten it.

“The primary tools craftsmen use to perform the work are their hands,” said Jeremy Spears, senior safety specialist. “It’s important to protect them.”

Recently, Construction and Operations personnel developed, sponsored, and conducted a Hand Injury Prevention Campaign. The focus was to protect worker’s hands and reduce hand injuries. The campaign was an organization wide effort for both groups.

While the campaign was a joint effort, each organization had specific activities to communicate hand safety to its employees.

Construction used weekly “Toolbox Talks.” Topics ranged from pinch points (areas of the hand prone to be pinned between stationary and moving objects) to power-tool safety guidelines. The talks were held during work briefings and weekly safety meetings.

Another highlight of Construction’s activities was the Reenactment Roadshow, which presented hand injury scenarios based on actual incidents. Seven reenactments were followed by question and answer segments. About 300 construction workers attended the in person sessions.

“This was a great opportunity to have an actual hands on re creation,” Spears said.

Each organization created a glove poster, with assistance from Safety and Industrial Hygiene and Communications, for the campaign. The posters had examples of work gloves specific to the organization’s needs, their intended use, and protection offered. Posters are displayed in shops and tool cribs.

“When we first started, there were just leather gloves,” said facilitator Linda Fiore. “Thankfully, we’ve expanded that. Now you have vibration gloves, gloves for electricians, and so much more. Showing the craft this poster was an important step. They can look at it and think, ‘I’m doing this type of work, so I need this type of glove.’”

Spears added, “According to Bureau of Labor Statistics, 70% of workers who experienced a hand injury were not wearing any gloves, and 30% were wearing damaged or incorrect gloves. The poster will close the knowledge gap when it comes to gloves.”

Surveys administered before and after the campaign were also key to its success. The responses provided important feedback and perspective. Pre campaign responses were generally positive about how CNS communicated hand injuries through lessons learned, glove knowledge, and supervisory support of hand injury prevention, which is valuable.

Management’s presence in the field increased more than 50% during the campaign.

“This allowed for observations in a lot of areas,” Fiore said. “They could see if the employees were wearing gloves or wearing the right gloves, and make the correction in the field.”

After the campaign, 99% of survey participants were more conscious of hand injury situations, while 98% of participants felt more educated about general hand safety.

“I’m very pleased about the campaign’s success, and I’m confident that our organization is better informed and mindful of how to prevent hand injury.” Atwell said. 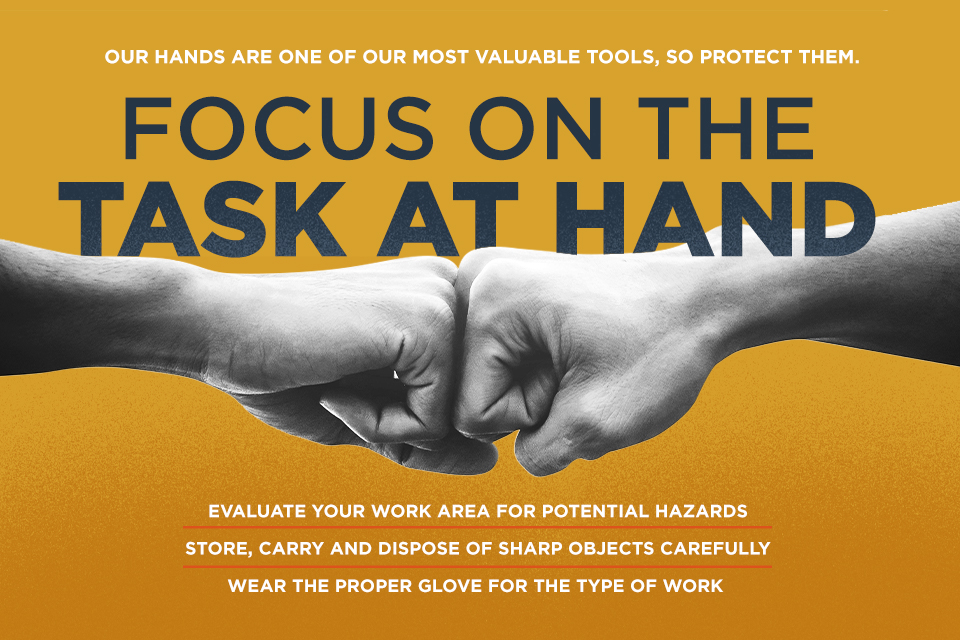 This poster was part of the Hand Injury Prevention Campaign.