Glovebox project does its part(s) 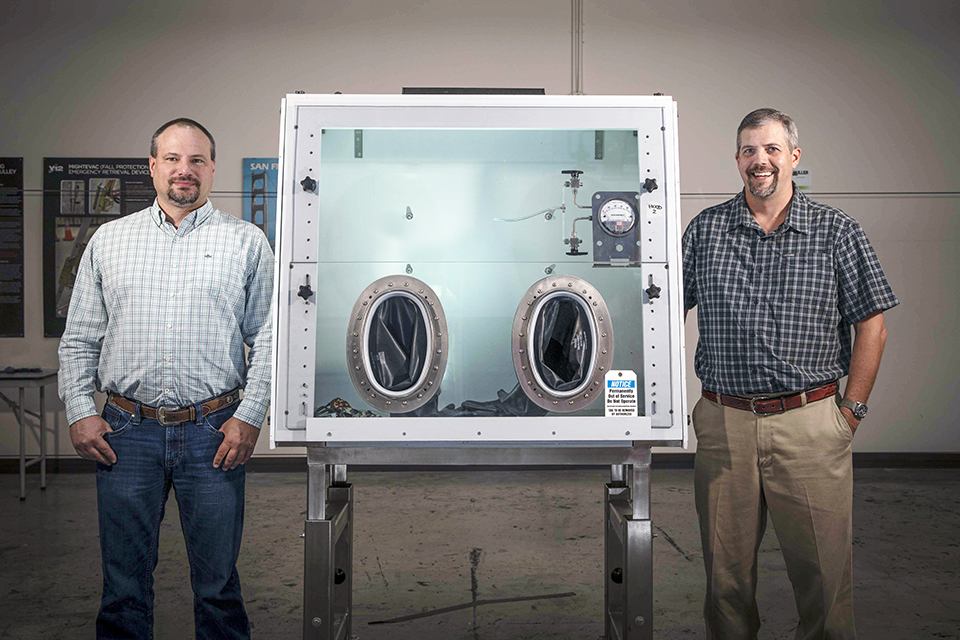 In the classic Wendy’s commercial, a fast‑food worker uttered the iconic line, “Parts is parts,” meaning any part of the chicken is just as good as the other, when it comes to making a chicken patty.

Brad Langley and the Specialty Mechanical Engineering group hope this line will soon somewhat apply – in a much more positive way - to parts of a glovebox.

He and his team’s continuous-improvement project creates standardized equipment for glovebox designs.

“Our goal is to provide at least four continuous improvement ideas a year,” Langley said. “This is something that’s been in the works. It’s been several years in the making.”

The glovebox has been around for years, in fact since the 1940s. The containment unit has at least one window and two ports, which allow workers (wearing arm‑length gloves) to handle hazardous and sensitive material in a controlled environment.

“The bigger ones can be 80‑feet long,” Langley said. “Some are 20‑feet long. It just depends on the process going on inside. An 80‑foot glovebox can be used for connecting several processes. It could have hammers, chisels, furnaces, lathes, mills. It’s like a little factory.”

Gloveboxes can be different sizes and perform a variety of processes; the shell (the box) and the stand are basically design constants. “They can be stretched or tweaked as needed,” Langley said. “You just have to adjust them according to the process inside.”

However, the support equipment can be more variable when building a glovebox. Langley and his team have developed 120 standards for this equipment, which include filter housing, lights, door, windows, criticality drains, and much more.

“We have completed design of all the standards,” Langley said, “and are starting to use them on different projects.” The standards were created on the Direct Chip Melt Bottom-Loading Furnace Glovebox project. They are set to be used on the GB02 Hood/Airlock replacement project and at Y‑12’s Lithium Processing Facility.

The purpose of equipment standardization is to reduce equipment costs and lead times, which are the periods between the start and completion of a process. With each project possibly requiring a different glovebox, expense can add up.

“A lot of things we put on it [the glovebox] should be the same,” Langley explained. “Different vendors would tweak it [the glovebox]. We thought why not just make a standard design for the vendors, so we don’t have to pay them to design it [the part]. This could save us 2,000 hours of engineering time from the vendors. And it saves us time, too. When the vendors create a design, we usually have to review it each time. We won’t have to review the standards anymore.”

Standardization will also reduce training and maintenance costs. Langley likens them to a mechanic working on a car.

“It’s like changing alternators in 40 different cars,” he said. “Now you would only have to change one kind of alternator.”

In addition, Langley hopes the standardization will be implemented beyond Y‑12 and used across the Nuclear Security Enterprise.

Standards will be reviewed annually to incorporate lessons learned and be updated as needed.