The History of the Biology Complex 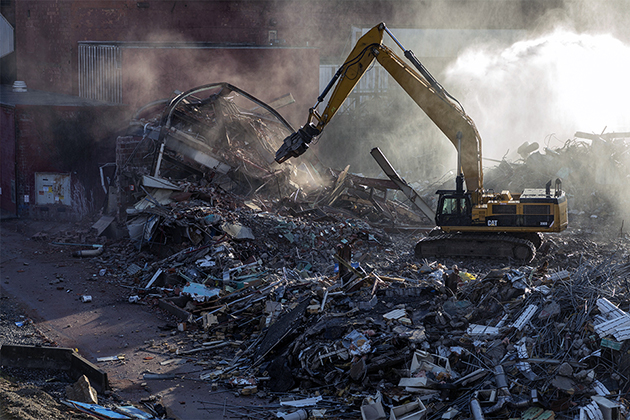 Demolition at the Biology Complex, October 2020 through February 2021

In the last few years, there has been a lot of clean‑out activity in the old Biology facilities at Y‑12. Demolition and cleanup is finishing on the largest of these 75‑year‑old buildings, which brings an end to a significant piece of Oak Ridge history.

How much do you know about Oak Ridge National Laboratory’s Biology Division at Y-12? Many have heard of the Mouse House, but here are some facts you may not know.

Most of the buildings in what is known as the Biology Complex originally were constructed in 1945 as expansion capability for Y‑12’s uranium preparation operations. Before the scarce U‑235 isotopes could be separated from the abundant U‑238, the material had to be chemically processed and converted to the source material required for the calutrons, the machines created to do the separation. Being constructed late in the race to create the first atomic weapon, the buildings saw limited use and were shuttered quickly.

As early as 1947, Clinton Laboratories (now Oak Ridge National Laboratory) began occupying buildings at Y‑12. With the arrival of Alexander Hollaender in 1946 as the Biology Division’s director, the staff numbers began to grow, and they quickly outgrew their Clinton Laboratories facilities in Bethel Valley. Because there was a moratorium on space from 1946 to 1947 at the lab due to uncertainty as to whether it would remain open as a national laboratory or be closed, groups from Bethel Valley, including the Biology Division, began to populate the buildings in Bear Creek Valley. Those facilities occupied by Hollaender and his staff would become known as the Biology Complex.

Originally tasked with studying the effects of radiation on plants and animals, the Biology Division’s expertise quickly grew under Hollaender’s supervision, which lasted for 20 years. Alvin Weinberg, a nuclear physicist and administrator who directed ORNL for 18 years, described Hollaender’s vision for the Biology Division as “a new style of biological investigation; the melding of enormous, expensive mammalian experiments with basic investigations on a much smaller scale … It is this unique combination of the big and small, the mission‑oriented and the discipline‑oriented, that is Alex Hollaender’s great contribution to biomedical science. It is a contribution that has forever changed biology.” Under Weinberg’s tenure as ORNL director, the Biology Division grew to five times the size of the next largest laboratory division.

The “big science” project in Biology is the well‑known genome work of Liane and Bill Russell, who brought their pioneering work studying the effects of radiation on mice from the Jackson Laboratory in Bar Harbor, Maine. A lesser‑known but internationally significant Biology Division genetics project was Elliot “Ken” Volkin’s and Lazarus Astrachan’s discovery of messenger RNA (mRNA), using techniques developed by Waldo Cohn. Weinberg described it as research that “has never received the acclaim it deserves.”

While the University of Tennessee certainly plays a prominent role in Oak Ridge National Laboratory today, the relationship between ORNL and UT goes back for decades, especially with the Biology Division. In 1967, Hollaender helped found the University of Tennessee‑Oak Ridge Graduate School of Biomedical Sciences. The creation of the UT Arboretum in Oak Ridge is another example of early collaboration between the school and the members of the Biology Division.

While Hollaender fulfilled his vision of creating one of the largest, world‑class biological laboratories in the world that welcomed visiting students and scientists from around the globe, he also focused on offering educational opportunities to small schools around the South. Representatives from the Biology Division visited small colleges and universities, including Historically Black Colleges and Universities, recruiting co‑op students with the offer of being able to use top‑notch equipment and work alongside award‑winning researchers.

Many know about the Mouse House, one of the largest mouse research facilities in the world, but many do not realize that it took a staff working in a full‑scale industrial kitchen to create the food consumed by the mice and the drosophila (fruit flies) used in Biology Division experiments. That kitchen later was revamped and provided food to Biology and Y‑12 workers until the closing of the Biology Division in 2002. Some say the canteen had one of the best burgers in Oak Ridge.